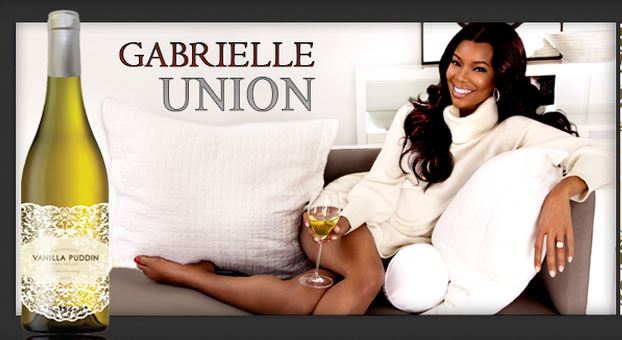 I was really excited about tasting Gabrielle Union’s Vanilla Puddin.  I had watched  an episode of LA Hair several months ago that showed celebrity stylist, Kim Kimble, styling Gabrielle’s hair for a photo shoot for the launch of her new line of California-based wine.  I looked forward to it coming on the market, and was floored when I saw the beautiful display in Total Wine.  The $16.99 price tag was a welcomed delight.

Gabrielle Union is a very well known actress and producer.  She has starred in a long list of films to include Bring It On, Daddy’s Little Girls, Think Like A Man and Bad Boys II, just to name a few.  She is currently starring in the BET series Being Mary Jane, where she plays a beautiful, successful woman in search of love.  According to the website www.vanillapuddinwine.com, Gabrielle was inspired by her love of wine to create something unlike anything else on the market.

This was a joint venture for Gabrielle.  Together with R.C. Mills, the CEO and founder of The Brand Elite,  and John and Michele Truchard of JaM Cellars, Vanilla Puddin was created.

Name:  Vanilla Puddin
Varietal: 100% Chardonnay
Vintage:  2012
Appellation: Napa Valley
Aromas and Flavors Young:  Imagine if you will, banana pudding in a glass.  The only thing missing is the whipped cream on top.
Aromas and Flavors After Breathing: Butterscotch, Oak (I tasted it again the next day)
This is definitely not your average Chardonnay!!  Its infused with lots of vanilla flavor.  I’m more likely to have it alone or with a dessert.  This will definitely be a regular in my everyday wine case.