There’s nothing like a Sunday afternoon in wine country to put you in the holiday spirit and get you ready for the new year.  Taking in the scenery while enjoying a few glasses of Napa Valley wine is the best way to decompress from all of the hustle and bustle of the holiday season.

Last October in wine country was met with much tragedy and devastation, as over 200,000 acres were burned in what has been described as one of the most destructive wildfires in modern California history.  Along with the devastating loss of life, over 8,000 homes and other structures were left in ruin.  Those affected have spent the last few months picking up the pieces of what once was their lives.  Whether mourning the loss of a loved one, finding a new home or rebuilding a business, the wine country community is still hard at work, seeking to find some form of normalcy.  But what also happened in the midst of this tragic event,  is a community coming together to support and encourage.  Funds like the Napa Valley Community Foundation Disaster Relief Fund and the Sonoma County Community Foundation Resilience Fund are only a few of the funds that were established to support fire relief efforts .   Donation centers, pop-up food kitchens and animal rescue initiatives were  put in place to support fire victims as well.  Wineries have donated proceeds from select purchases, and industry events, both locally and nationally, have even committed portions of their proceeds towards these efforts.

Even with all that has been done to help rebound wine country, a marked change in tourism is noted.  Travelers have been somewhat reluctant to return, even cancelling future plans under the impression that it was completely destroyed by the fires.  While there was significant damage to homes and properties in certain areas, there were only a handful of vineyards and wineries that suffered extensive loss.  The Napa Valley, for example, is home to over 500 wineries and tasting rooms, and is still rich with life and anxious to welcome guests once again.  Wineries and other establishments in the Sonoma Valley are likewise open, thriving and back to business as usual.  These communities continue to need your support.  A fun and adventurous way to contribute would be rounding up the girls (or guys) and heading out to wine country to have a good time.  If travel to wine country is not in your near future, you can still show your support by purchasing Napa and Sonoma wines from your local stores and restaurants.

Quick stops at wineries or in tasting rooms could be a viable option if you are looking to visit many places in one day.  But my advice has always been to visit no more than three to four wineries per day, and spend honest time at each one.  That means, if possible, indulge in a seated tasting (or just grab a glass or two and take a seat) or tour to really give yourself the opportunity to appreciate the entire experience.  The first destination on our Napa Valley getaway was Jessup Cellars.  A quaint tasting room in downtown Yountville, Jessup is the perfect place to stop for a cozy tasting experience and some fantastic wines.  Our seated tasting took place in the art gallery where Jessup features curated art throughout the year from both regional and national artists.

Our tasting highlighted a selection of six wines (although our super star host, Brian, brought a few extras to the table!), paired with cheeses from the popular Atelier JCB, also in Yountville.

While initially, our setting was comprised of a plate of cheeses, a sample of dark chocolates, nuts, crackers and ONE wine glass, my group and I are adventurous explorers of wine and enjoy taking our time with each one.  That means taking small samples and noting our early observations, allowing the wines to evolve in the glass, then going back to revisit its characteristics.  So one glass just won’t do.  I hope we did not catch our gracious host off guard by asking for a million more glasses, but he happily obliged. 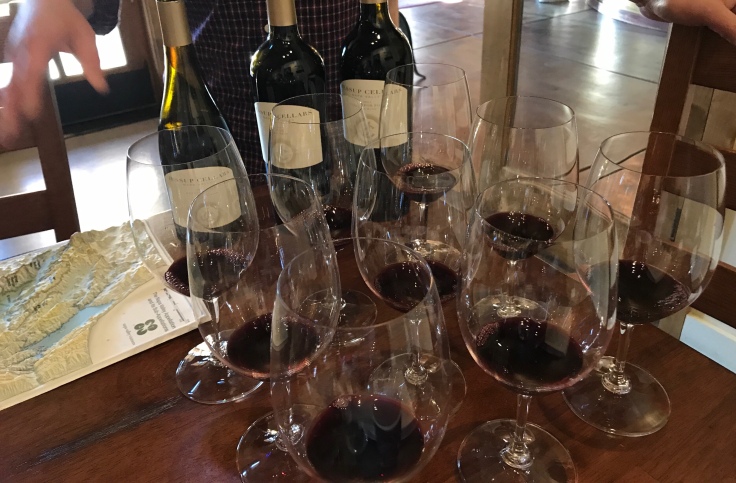 Confession here…I missed breakfast and was quite famished when I arrived.  So, I did not do a very good job at pairing the cheeses with the selected wines.  I just ate them.  And the crackers.  And the nuts.

2016 Jessup Cellars Chardonnay (Carneros)
$45
100% Chardonnay/15.1% ABV
10 Months in French & American Oak
Initial Nose: Pineapple, lemon, vanilla
Initial Palate: Nectarine, lime peel, tropical fruit, vanilla
Final Observations:  The nose continued to explode in the glass.  It transitioned from light fruits to creamier aromas of butterscotch, vanilla, caramel and oak.   The palate was met with much of the same development.  At the front of the palate, still notes of lime, nectarine and some pineapple, with vanilla and caramel rounding out the flavors.

2011 Jessup Cellars Cabernet Sauvignon (Alexander Valley)
$70
14.8% ABV
Initial Nose: Ripe red fruit, cocoa, tobacco, cola
Initial Palate: Burst of ripe red fruit, tobacco
Final Observations:  The 2011 vintage is one of my favorites across the board.  This wine became more bold with time.  The explosion of dark red fruit became intertwined with black pepper, bell pepper, and tobacco.  Still a hint of cola and spice on the finish.  The tannins were nicely structured without being overpowering.

Stay tuned for our next stop!